The ONE from Every Season 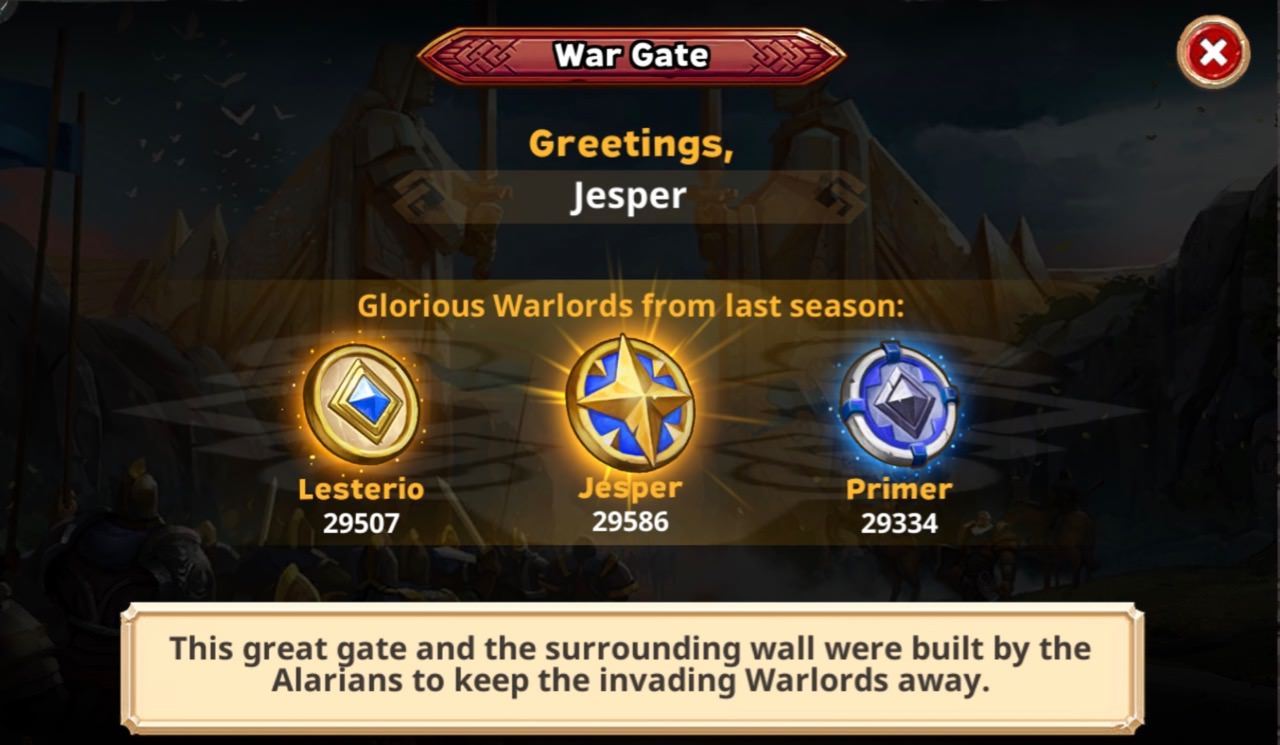 PvP Season 11 Top 100
Just in case some warlords with lots of time on his/her hands wanted to count how many WLI members are in there!!!
Last edited: Aug 16, 2018

Jin said:
count how many WLI members are in there
Click to expand...

33 out of the 50 members of WLI mannaged to get in there.

Does someone has this information somewhere?

Edit: on second thought, I think it was a player with Asian characters. We were discussing the translation of his name in the Wannabes thread around page 11-12.
Last edited: Aug 19, 2018

Yes. First season there were a bunch who had 22 saved battles from old format. Jin has fought all his so didn’t make leaderboard until second season. I do remember the same person won first and second season under new format.

From the depth of my fuzzy brain comes the first new PvP season top 3.
1st : Lbf
2nd: BALY
3rd: DroDim
Not a WLI members in sight.

I didn't win the first 2 seasons but ironically I've a higher spawn rate than the ONE.

PvP Season 14 Leaderboard
//sorry @Jin to take this from you this Season, but I have to brag about it and also time was running out and I didn’t want to miss the 1 day window to make the clip.

Top 3 for this Season

Bellow you have a small clip with the top 100 players from this season and for the first time in history I was able to get to top 100 (position 96 to be more exact). After this experience I posted a Guide on How to get the fastest in top 100 Season PvP. You can find it here - https://forum.warlordsofaternum.com/index.php?threads/guide-–-how-to-get-the-fastest-in-top-100-season-pvp.10651/

I just made a clip for the last season, just not to lose it before next season starts in several hours. if nobody will upload it, I'll do it in the next few days

@Victorash.Thank you very much for continuing the update on Season Top 100 and Top 3.

This season had an aberration where some players received as many as 20 extra spawns due to a glitch. Additionally, there were several spawn sessions where all new spawns were clones of your own army.

Innogames awarded 2000 War Coins to all players as an apology for the various glitches.

Congrats to Lesterio, who cruised to an easy victory.

This was the second season with 5v6 and 5v7 spawns. Not many diamonds were spent by the top warlords, as many were leery of another glitchy season. Thankfully, the season was relatively glitch-free, with the exception of a few sessions which spawned clone armies.

Hurdles for competing Warlords included a change in spawn mechanism about 3 days in, courtesy of our intrepid dev team. Needless to say, competitive players were up in arms over this unannounced change.

This was followed shortly after by the download bug that had many players unable to enter the game for nearly a day. After that, the Blue Tiles of Misery bug affected our iOs players for a few spawn sessions.

Props to Alex, who had a phenomenal run with an army under 30k AP. That's some studly fighting!

Season of the Nymph

You must log in or register to reply here.